A connector is a component that connects UNIFYBroker to a subset of identity data in a target system. In some cases multiple connectors may be used in parallel to give an overall picture of a target system. Once a connector has been registered to UNIFYBroker, it can facilitate the reading and manipulation of data.

New connectors can be added by clicking on the 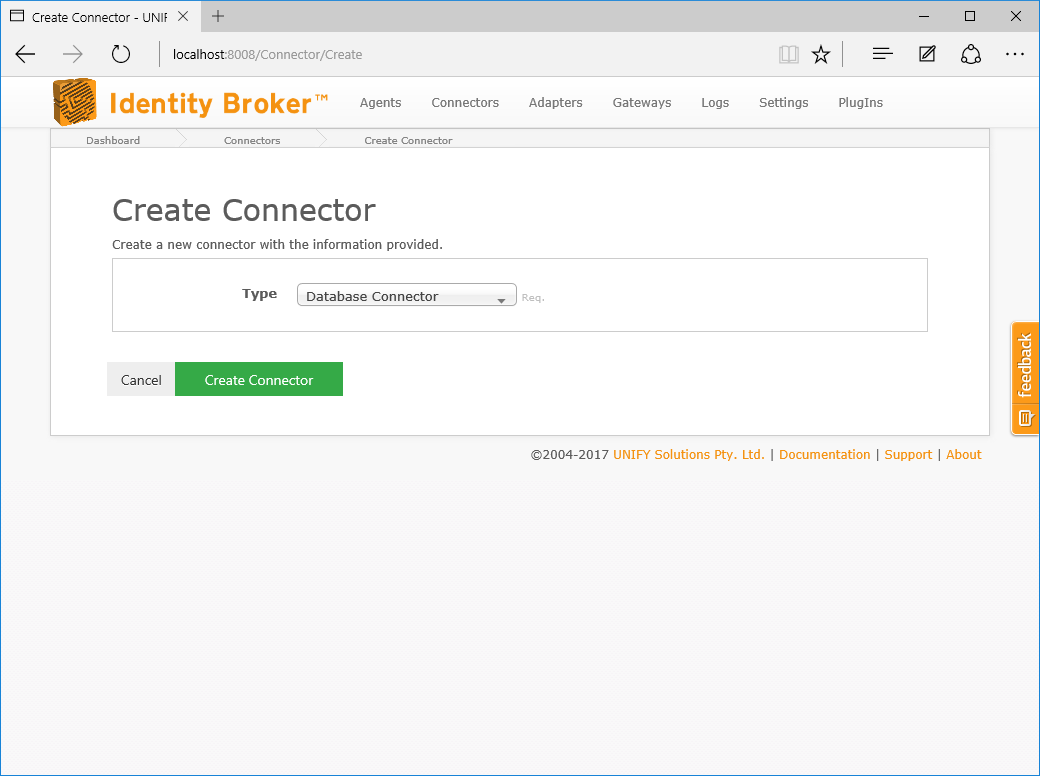 The following properties are required to configure a connector.

The remaining configuration is connector specific. Refer to the documentation for the selected UNIFYBroker connector for more information.

Once a connector has been configured, its configuration can be updated by using Update Connector on the functions menu. 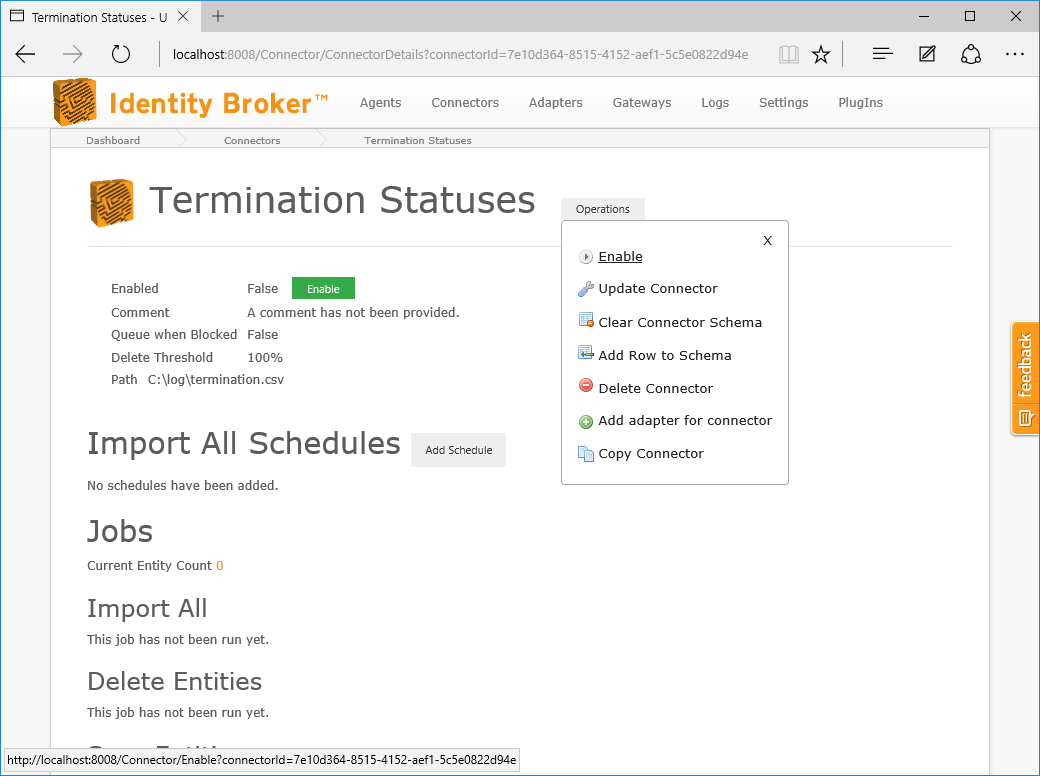 The entity schema of a connector describes the anticipated structure of data from the target identity store. This anticipated structure includes the expected types and ranges of the incoming information. Each field in the schema must correspond to the name of the attribute in the target system. The schema defines the scope of data that the connector is able to manipulate. 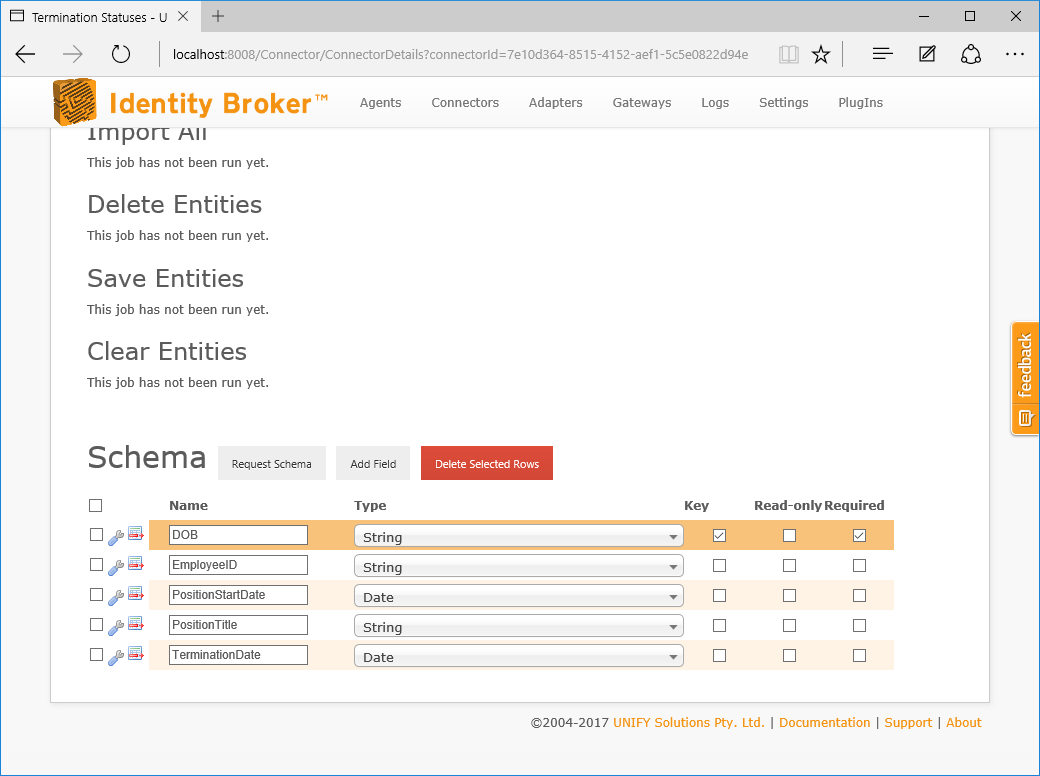 Many connectors provide Schema Providers to facilitate the auto-configuration of schemas from the target system. Where available, a connection will be made to the target system to attempt to retrieve the available field definitions.

Schema providers can be applied to a connector by clicking the Request Schema button above the the connector schema. 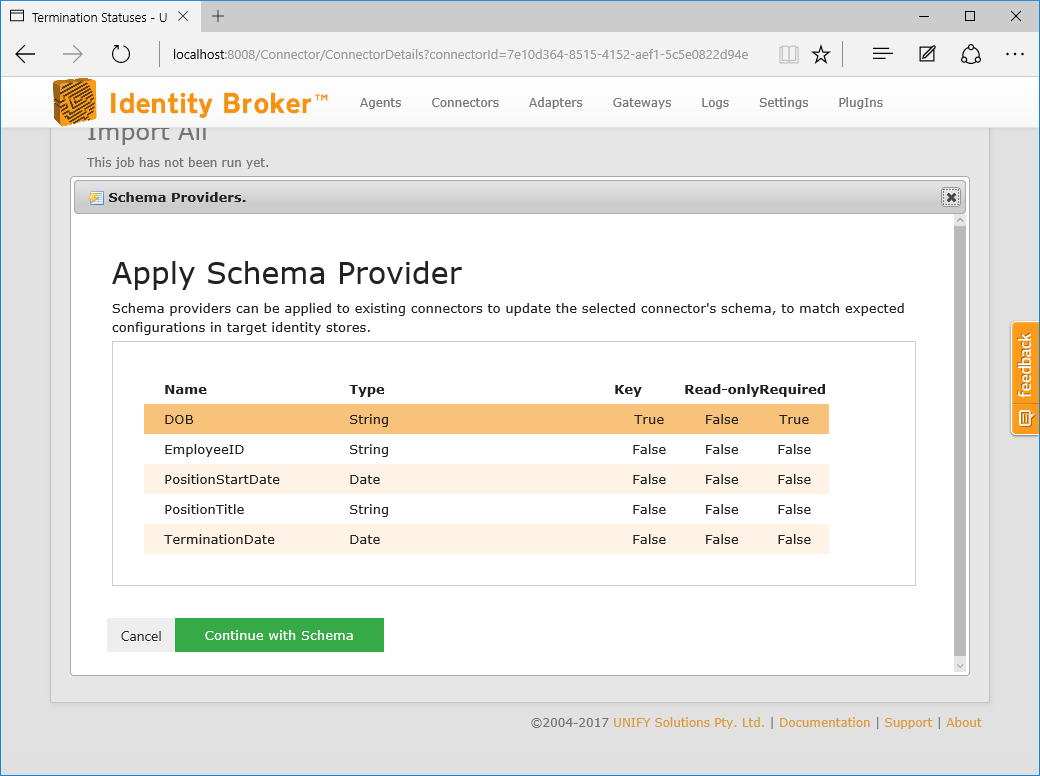 Some connectors require a set schema to be provided in order to function, and will come automatically configured with the required fields.

TIP: For more information on the expected field names and available schema providers refer to the appropriate connector documentation.
WARNING: Changes to the connector schema require the clearance of connector entities to ensure correct operation. If modified, a warning will be displayed until the issue is addressed.

TIP: Connector operations can only be executed when a connector is enabled. 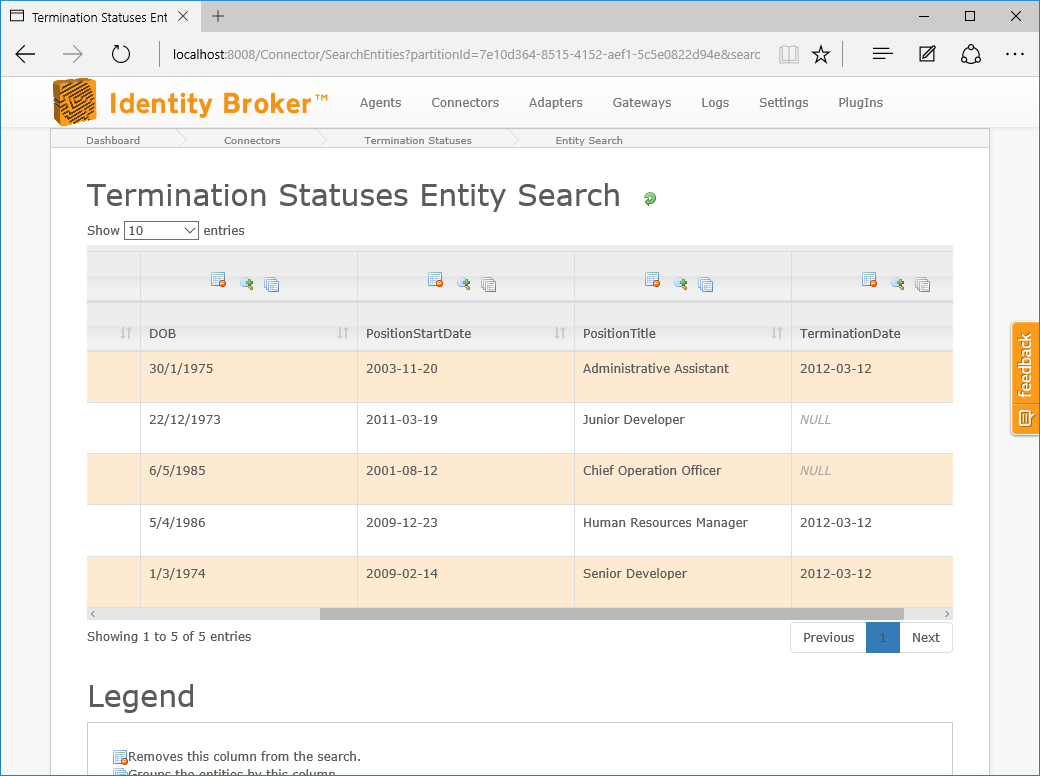 Both the connector's entities and target identity store can be simultaneously updated through the use of the available connector operations. For more information on the operations available to configured connectors, refer to the appropriate connector documentation.

An Import All operation will request the current state of all information available to the connector. This will completely refresh the connector entity repository, removing any entities that no longer exist in the target system. This operation may have a lengthy execution time depending on the size, type and location of the connected system. Subsequent operations will be faster following the initial import, but it is recommended that expected import times are measured prior to regular scheduling and use.

Once a connector is enabled, this operation can be manually triggered by clicking the Import All Run button or the

Execute Import All option from the

An Import Changes (polling) operation will request any changes from the target identity store. Changes include new entities, updated entities and deleted entities. This is the preferred import operation where supported due to its lightweight footprint, and should be scheduled to run fairly regularly (eg. every few minutes).

Once a connector which supports polling is enabled, this operation can be manually triggered by clicking the Import Changes Poll button or the

Execute Import Changes option from the

An Add Entities operation will save new entities to the target identity store. This operation is triggered from a request by a foreign identity management platform. Some connectors may also write back certain information immediately to UNIFYBroker following an add, such as for systems where the key of the connector is generated by the system.

An Update Entities operation will update existing entities in the target identity store. This operation is triggered from a request by a foreign identity management platform, and will typically override all information about the object in the target system.

This operation will delete any entities from the target identity store matching provided keys. This operation is triggered from a request by a foreign identity management platform.

Once a connector is enabled, this operation can be manually triggered by clicking the Clear Entities Clear button or

Clear connector option from the

WARNING: Clearing and reimporting entities will result in new entities being created with new entity identifiers. This may be of note if the entity identifier is used for join or relational criteria in an identity management system.
TIP: Operations that can be run manually can also be run against multiple connectors simultaneously from the Connectors tab.

Connectors can be configured to run import operations against the target system at regular intervals. This can be done through the use of the scheduling interface. A number of connectors also allow for polling of a target system, which retrieves the changes from the target system since the last import. See Connector Schedules for more information.

Each connector group, alongside a name and comment, can be configured with a Exclusion Group setting.

Exclusion groups will only allow one connector run import operations at a time (sequentially). If two connectors in the same exclusion group run at the same time, the second is blocked.

Connectors can be configured with a Queue when Blocked setting, which describes the behaviour of a connector when it's blocked. Connectors that queue when blocked will fall into a queue of connectors waiting to run an operation, until the connector that blocked the operation finishes. Otherwise the blocked connector will simply not run the operation.

Each connector contains specific configuration options dictating how it will interact with the target system. Refer to the product guide for each specific connector for more information.

All connectors are registered as plug-ins in the UNIFYBroker about page.

Refer to the version for the respective connector plugin.