At a customer site there's a problem with the IDB Requirement for Name Pipes protocol in SQL. Named Pipes doesn't support some of the High Availability stuff they're doing and they're also critical of Named Pipes being a 2008 technology that has been superseded by TCP/IP. They want to at least turn named pipes off after installation. Is this supported? IdB seems to be functioning with Named Pipes turned off post installation.

Is there an alternative to using Named Pipes? With Named Pipes off, after updating the extensibility folder and restarting the service I get an exception "The server was not found or was not accessible. Verify that the instance name is correct and that SQL Server is configured to allow remote connections. (provider Names Pipes Provider, error: 40 - Could not open a connection to SQL Server)..."

What version of Broker are you using? I'll look into it further, but named pipes should no longer be a requirement. Are you sure your updated configuration is correct? Can you connect to the sql server using another program or tool from the server running Broker using those credentials?

In addition to Beau's comment, what connection string is in use (please don't include the password)? We may need to update the default template and/or documentation or recommendations. To connect using a different protocol (TCP/IP), see https://www.connectionstrings.com/microsoft-ole-db-provider-for-sql-server-sqloledb/connect-via-an-ip-address/

Here are the versions Daniel is using: 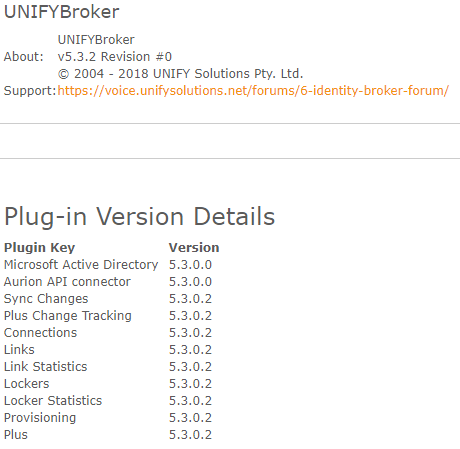 The source of the error was that I was copying in the dataengine extensibility file from the saved configuration and that had the wrong connection string. I copied all files but the dataengine and the service now starts correctly. However, when I navigate to localhost:8008 I get a 404. It seems the requirement for Named Pipes has gone away though so can probably close this ticket.